The level of Te Waihora/Lake Ellesmere is managed by periodically opening the lake to the sea. This happens two or three times each year to manage for a range of values, including wildlife, wetland vegetation and fish habitat, mahinga kai, customary fisheries, water quality, summer levels, land inundation, waterway networks and infrastructure, and fish migration.

Te Waihora/Lake Ellesmere levels are now available on Environment Canterbury’s  river flow data web page. These levels are average readings taken from the two gauges around the lake, one at Taumutu and the other at Seabridge Road/Nutts Cut. Please note that wind effect should be taken into account when interpreting this raw data. The wind information can be obtained by contacting Customer Services at Environment Canterbury.

For the first time we were able to capture some aerial footage as the lake was opened on 28 September 2016. You can view the footage here. For me, the footage demonstrates the scale and dangers of the job we face when opening. Hopefully people can appreciate that when the sea is bigger (it was relatively calm that day) the safety concerns and problems we can face even accessing the site.

Q: What was the lake level reading before this one?

Q: When was the lake last opened to the sea?

A: The lake was mechanically opened on Saturday 5th of June 2021.

Q: At what levels an the lake be opened to the sea at this time of year?

A: The lake may be opened at any level between 1 April and 15 June. From the 15th of June the minimum opening level is 1.13m.

Q: When can the lake be opened?

An artificial opening of Te Waihora/Lake Ellesmere is governed by the Lake Protocol which outlines the procedure around exercising the consent which lists key values of the lake to be considered in the decision making. A decision to open the lake is only made when the representatives in the Protocol Group have been consulted. Currently, the Protocol Group is consisted of the following organisations: (Fig 1). 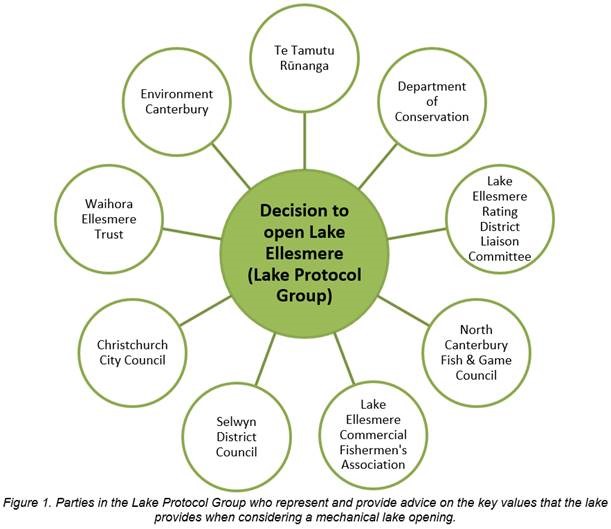 Q: Where can I find the resource consent for the lake opening?

A: The Hearing Commissioners decision on the new joint resource consent application by Te Runanga o Ngai Tahu and Environment Canterbury was received on Wednesday 22 January 2014. The decision was to grant the application for a period of 15 years subject to a suite of mitigation measures. You can read the decision here:  RMA92023020 Decision – Final

Q: What lake opening investigations are being carried out as part of Whakaora Te Waihora?

NIWA and the University of Canterbury have investigated options for an engineered lake level. As part of this project a website has been created which summarises the options that have been considered over the years.  There is further information here.